As usually, any trip we attempt to undertake that has a specified departure time encounters delays. We wanted to leave for St. Joseph State Park around 1:00 pm Friday. We finally hit the road for the two hour trip around 3:30. The park closes the gate at sundown, but since the days are growing longer, we arrived in plenty of time to set up camp. We reserved a campsite earlier in the week by phone and at that time there was only one site left. The park seems to be highly utilizes, so be sure to make a reservation.

St. Joseph State Park is located on the Gulf of Mexico in the area I believe is called the Emerald coast. The park is on a thin sliver of land that separates the ocean and creates a bay. This creates a nice situation for campers by providing an ocean experience as well as the bay for calmer activities. The park provides access to the bay by way of a boat ramp. 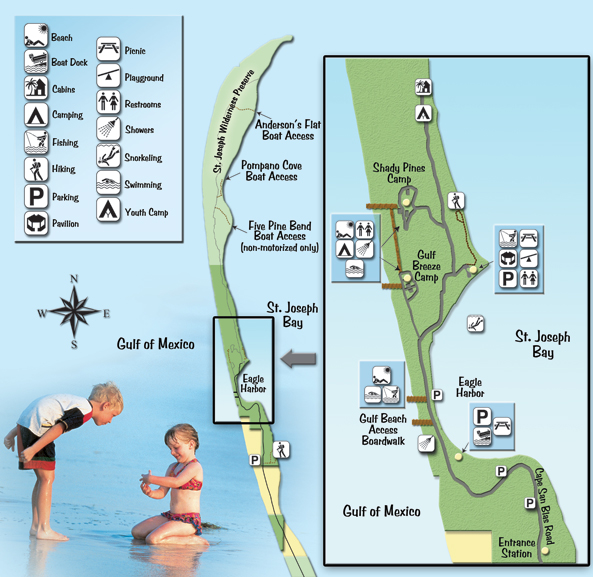 Since the entire family was going this trip, we took our Coleman tent trailer (pop-up camper). We’ve had this camper for about three years and it’s a nice camper 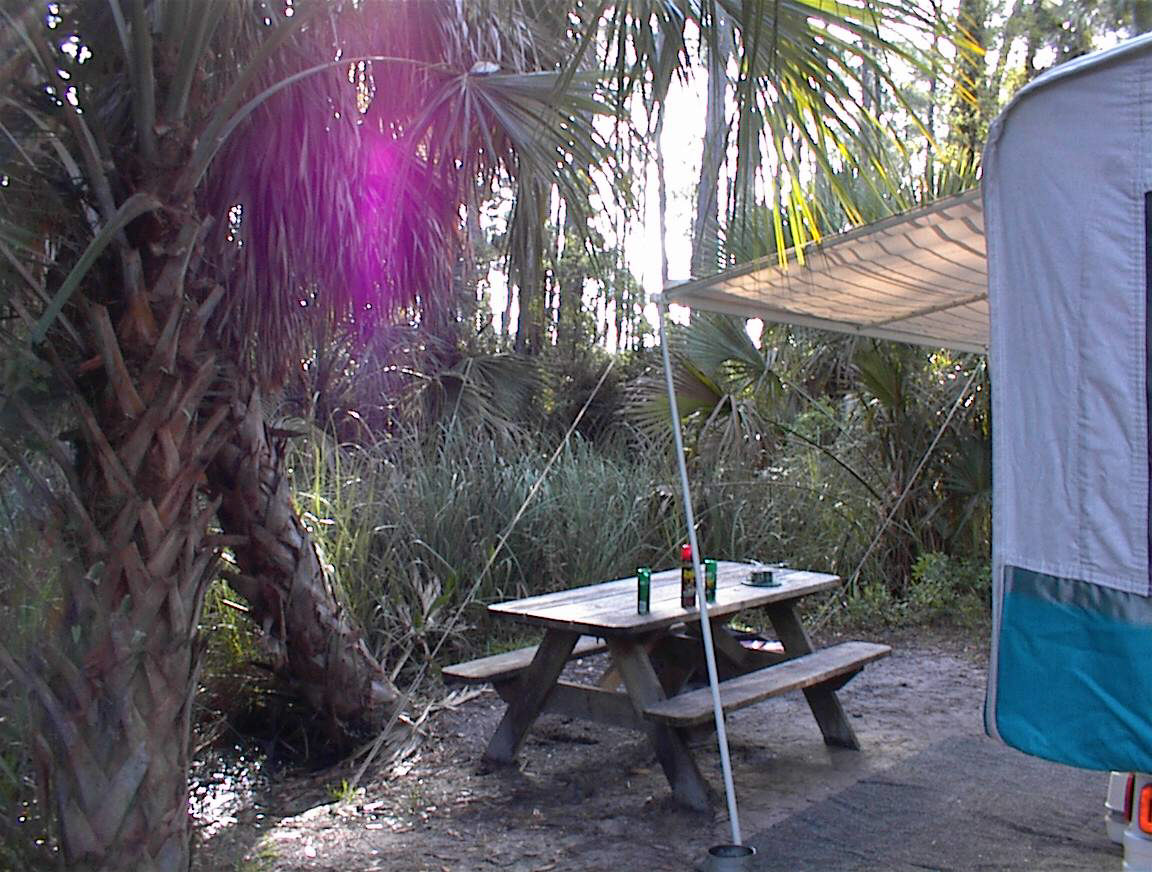 The parks terrain is quite lovely. Scrub oaks, palmetto bushes, pine trees and assorted plants common to ocean frontage and tidal wetlands are in abundance. Large sand dunes, covered with sea oats, create a barrier protecting the emerging and more stabilizing plant growth behind it. This is where the park’s camp sites are. Most are provided with pretty good privacy by way of trees and palmetto bushes. The sites are back-in and are level. Our site had water and electricity. I don’t think any sites have sewer connections, but a dump station is provided toward the exit. The park has two drive in camp areas for trailers and tents, and one area for youth camping. There are hiking trails and boardwalks leading from the camp sites to the gulf and also connecting the two main camp areas. Showers and toilets are provided as well as a family picnic and playground area.

As I backed into to our site, I noticed that it was surrounded on the left and back side by water and cattails. Then I noticed the dancing of little specks upon my windshield. Mrs. Mosquito! Hungry no doubt! I am very thankful for Deep Woods Off.

Once set up and with our bug spray applied, we surveyed our surroundings and noticed that many campers were from Indiana. Later, after talking to a camper for Indiana, we found out that several years ago, that camper had come to St. Joseph on spring break and had such a wonderful time, she bragged to all her friends and each year since, the number of Indiana campers heading here has increased during spring break.

Our first night was pleasant, but we didn’t make a campfire because it was a tad too warm and also the mosquitoes were very active. The Florida wildlife was active too. Again, like last weeks camping trip, our camp was visited by a raccoon. This one was not as inquisitive as last weeks and just waded in the water among the cattails hunting for food. 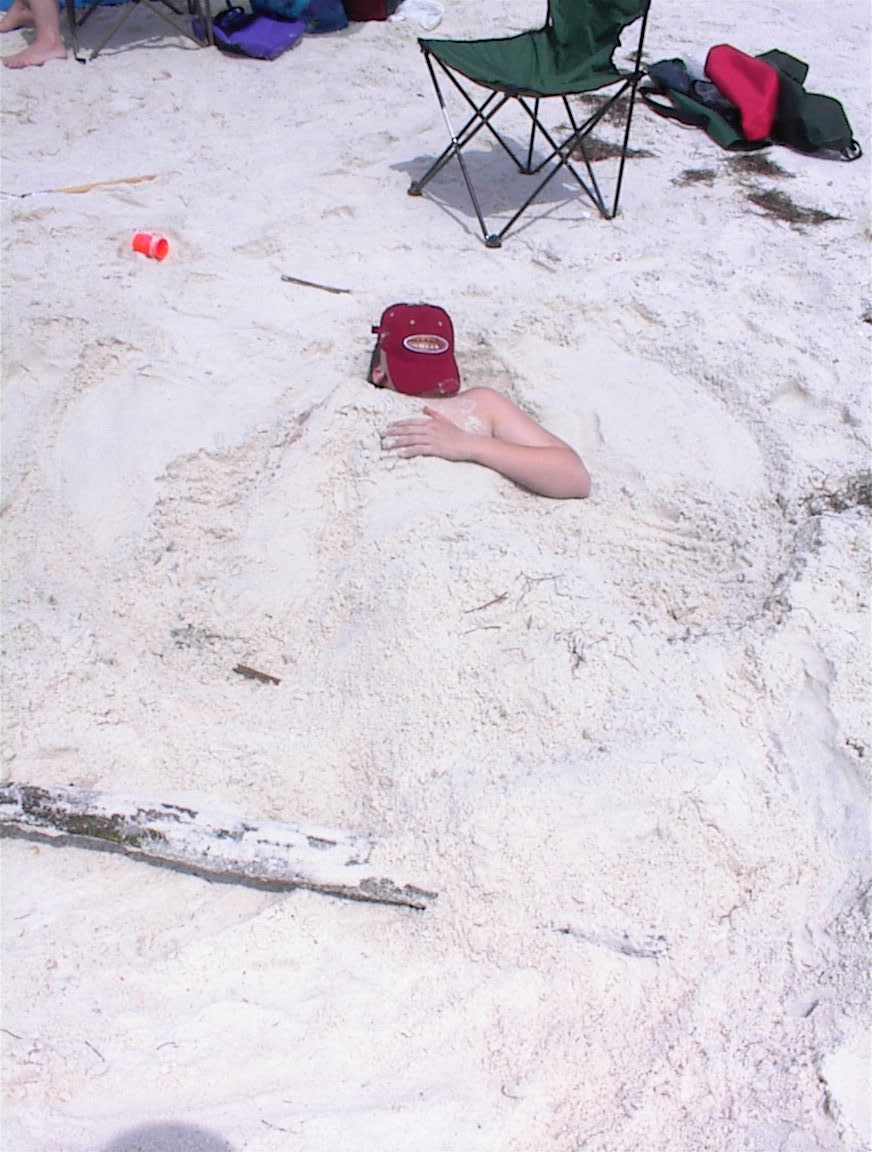 Saturday was sunny and warm. Basically, we went to the beach, equipment in tow (Chairs, towels, umbrella, lotion, reading material), found a nice spot and plopped down. My kids, braving the relatively cool gulf waters, swam and splashed in the calm surf while we sat and read. The beach was not crowed at all and in this part of the country hardly ever is. You would have to go to the major areas like Panama City Beach or Pensacola beach to feel crowded. 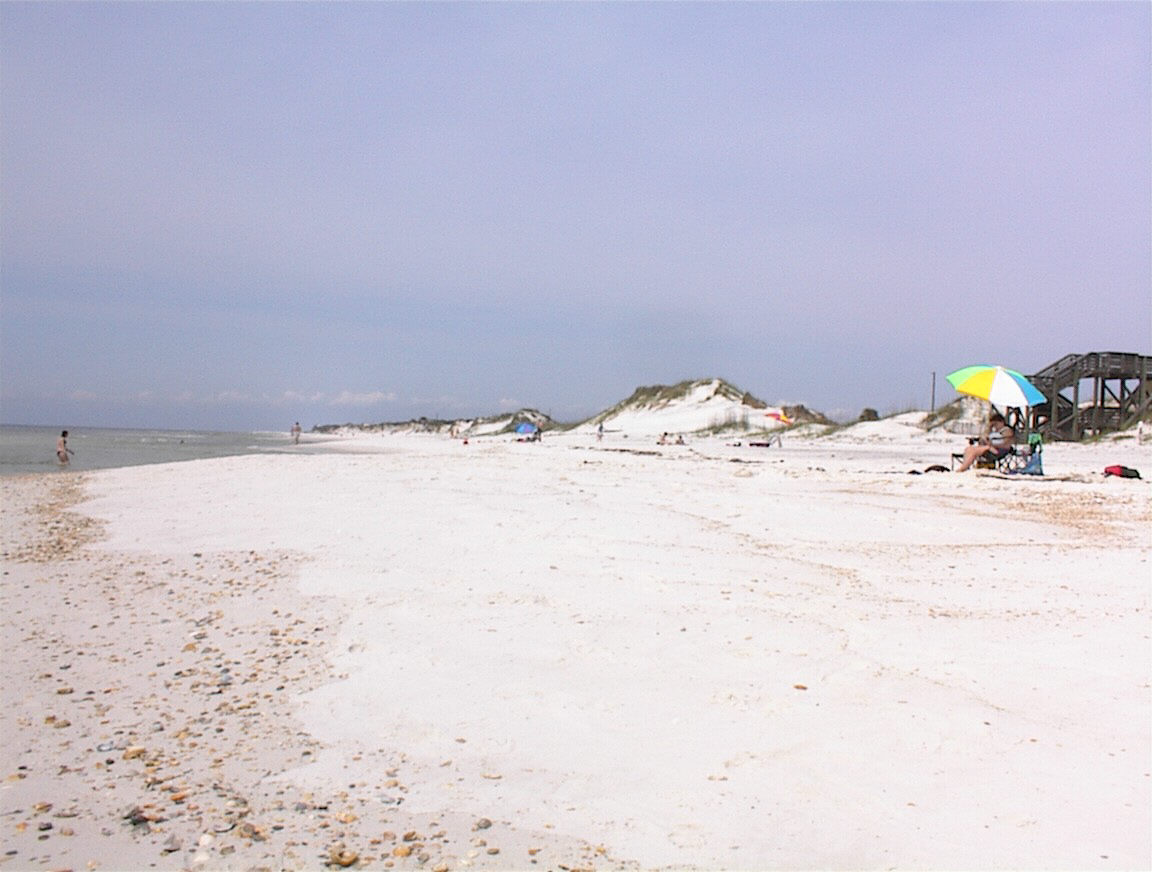 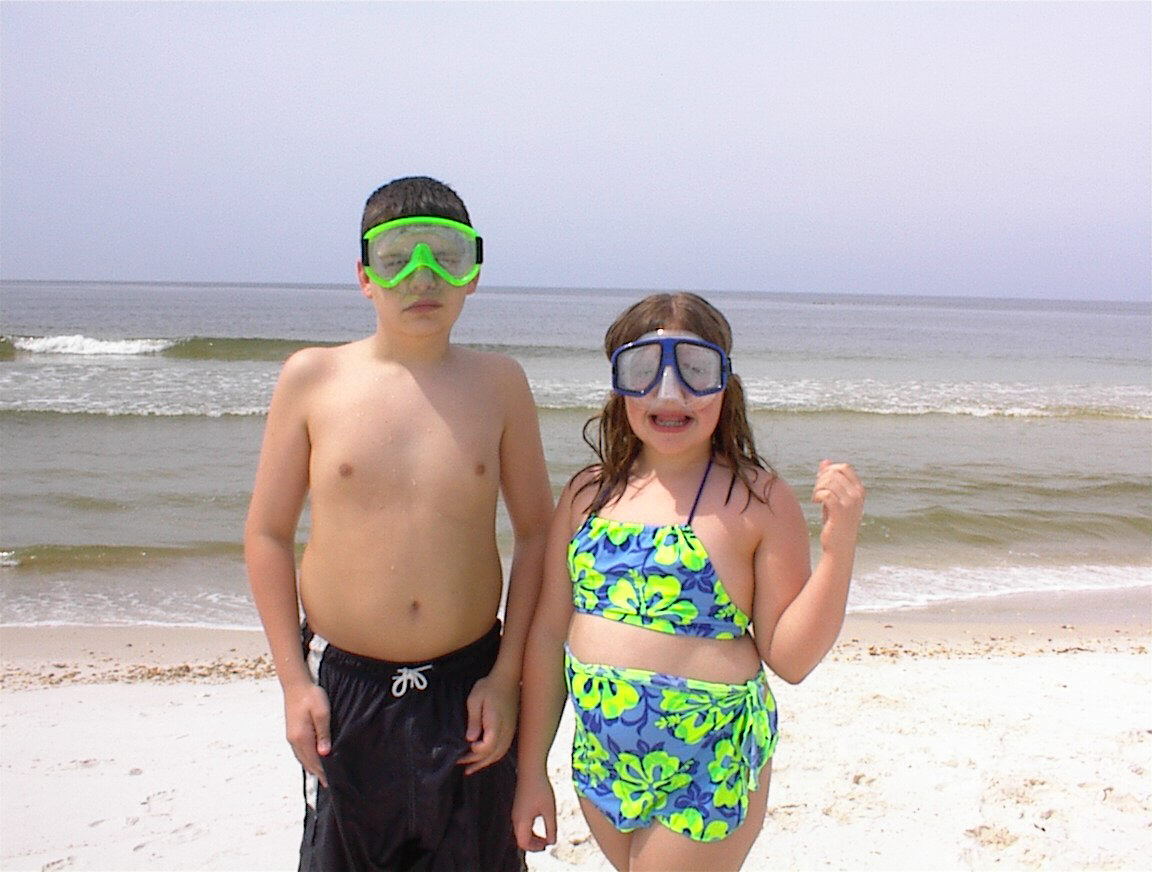 As evening approached, we could feel the weather changing. Later, the sound of thunder was heard. The weather reporter said that a front was coming through tonight and his forecast was 100% right. All night long the rain fell upon the roof of the camper. During the night the temperature dropped and my wife had to turn on the camper’s “chill chaser” to stay warm. The next morning I checked the car’s thermometer and it read 49 degrees, but the wildest thing was the wind. Man, was it blowing!! I walked down to the beach and it must have been a steady 30 mph! I am sure those Indiana folks were surprised at the weather change.

Since it was cool and windy and our check out time was at 1:00, we decided to load up and head home.

All in all as far as beach camping goes it was a pretty good trip. I have not done a lot of beach camping to compare it to since I have access to a cottage on St. George Island. St. George is just to the east of St. Joseph and the beaches are very similar. We have camped at St. Andrews State Park in Panama City and I must say that the beaches to the west of St Joseph are better. The sections from Panama City to Destin, to Pensacola, have the most beautiful beaches, and the sand there is sugar white. The water typically is emerald green and usually pretty sparkling clear. St Joseph’s beach sand varies in color from moderate white with blackest sand mixed in here and there. The water was not really clear either. I suspect that the water condition is due to the Apalachicola River emptying into the ocean at Apalachicola, FL and at St. George Island. The bay is formed there by the Island. The river provides the nutrients for the local oyster economy there. This river water, with its abundant silt, clouds the waters and impacts the ocean. Last week my son and I backpacked and camped along the Apalachicola River.

So if you ever wish to camp along the gulf coast in the Florida panhandle area, I would first suggest St. Andrews State Park in Panama City, for its beaches and then either St. Joseph or St. George State Park. But really, if you like beach camping in Florida, and you like scrub oaks, palmetto plants, and sand dunes, pick any of them and you will be happy.
Read and post comments | Send to a friend

Popular posts from this blog

March 08, 2003
Torreya State Park is located about 60 miles west of Tallahassee, Florida in the “Big Bend”. This park is noted for its varied terrain, ranging from hardwood to swamp wetlands and an area we Floridians could call “canyons” (large washed out clay hills). It’s the closest thing we can find around here that is similar to the beautiful Appalachian Mountains. The park has a nice network of trails to explore. My 13 year old son and I arrived at the park on Friday afternoon at 3:00 pm, the first day of spring. We had made reservations ahead to ensure our sites in the primitive camp areas. Because our region had been receiving abundant amounts of rainfall, we knew the mosquitoes would be in full force. We were not disappointed. We came prepared with plenty of bug repellent.  This trip could be called an "Introduction to Backpacking" for me and my son. We have done car camping, but yearned for a taste of “true” camping. Having enjoyed accumulating our assortment
6 comments
Read more

June 29, 2013
Removing Anti-Reflective Coating Anti- reflective coatings sometimes will start to flake off your plastic lenses if you have the older type of coating. As I type this, I'm looking through lens that are now clear as new. My progressive glasses are 3 years old and are polycarbonate, scratch resistant, UV protected with a $65  anti-reflective coating. About an hour ago I could hardly use them and pricing new lenses were $400. When I asked the Optician about the quick deterioration of the coating ( they now offer a new and improved coating costing $135) he asked if I sweat a lot, as that can cause problems. Lately this has been true, because I have been doing spring yard work and digging a garden pond causing the lenses to deteriorate fast. This is how I removed the coating from my lens.  I took standard iodized table salt (figuring if salty sweat was effective, a salt solution might be also), poured it into a bowl of water, heated in microwave to a temp I could touch,
7 comments
Read more

November 03, 2013
Review of Crocs Men's Modi Flip Flops As a result of an injury and suffering from Plantar Fasciitis and a heel spur, I needed some comfortable flip flops that offered support and heel comfort.  I previously had some Croc knock-off, slip on shoes and they felt comfortable, so I did some online research, reading reviews about various Croc shoes, and determined that the Croc Modi Flip was highly regarded. I went to my local sports store and tried on half a dozen flip flops to see which were the most comfortable, comparing them to the Modi Flip, and determined I like the Modi the best as they seemed to provide the best comfort for my heel. As an added bonus they have nice foot massage bumps. I first bought size 11 thinking it fit the best, but once at home, sitting and walking in the house, I decided they were a little snug across the top of my foot, so I exchanged them for size 12. They fit perfect, not too tight when sitting in a chair, yet snug enough when walking.
8 comments
Read more