April 28, 2007
A few weeks ago, my wife wanted to buy a fountain and landscaping for a barren area by our house. 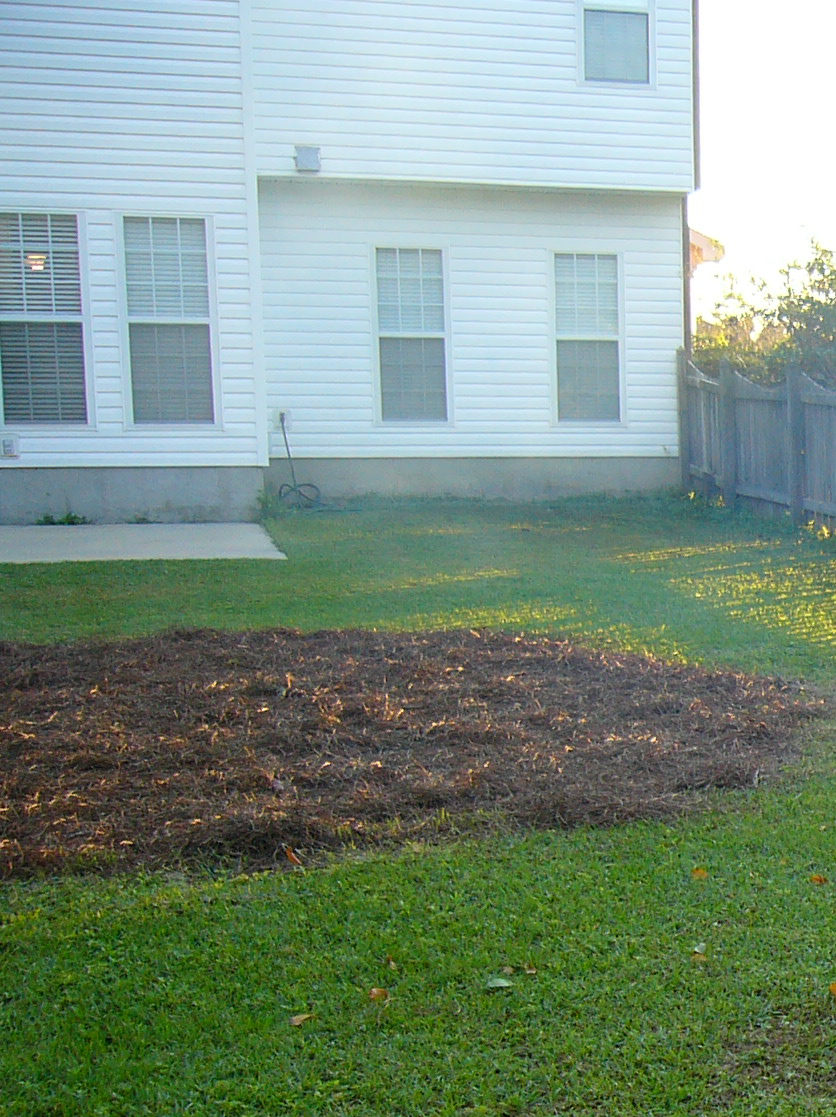 in the back yard and this area needed some dressing up. I agreed and we started searching for a nice fountain. As we looked at local garden centers, I saw some ponds constructed with water falls. I always thought something like that would be nice to have and so I was inspired to build one in this location.

I did a bit of research, spread out the lawn hose for the pond outline, then began to dig. Since most resources indicate a pond should be at least 18 inches if you intend to put fish in it, I made sure that was the final depth. I added a few step areas for potential plants, made sure the perimeter was level and carefully examined the soil for anything that could puncture the liner.

Fortunately, the digging area was very sandy and I was able to complete the hole in only three hours. I installed the liner with the help of my son and we were ready to fill the pond with water. 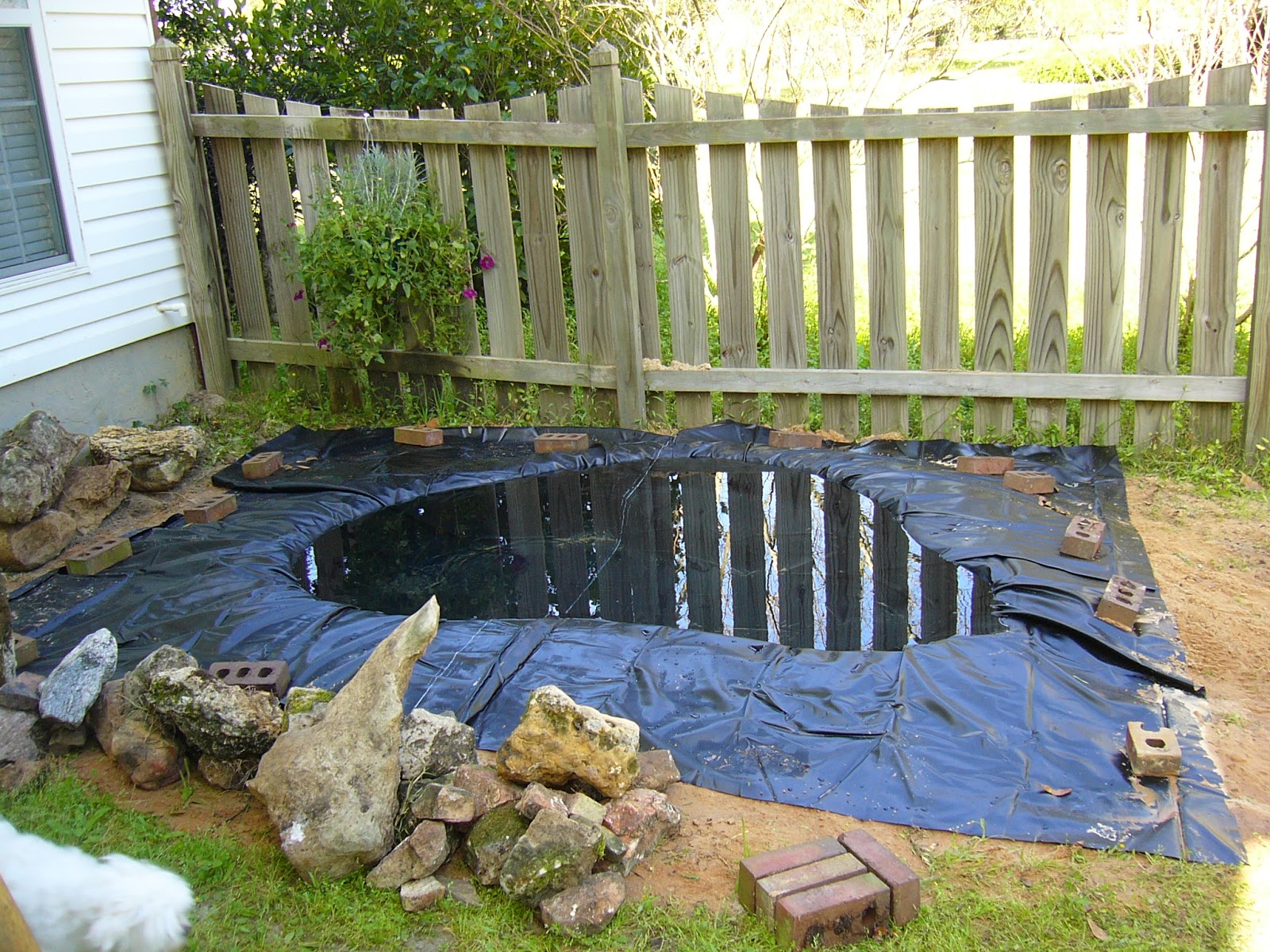 
Previously, I had moved some rocks that we had scattered around our house to the pond area and had made a couple of trip to the local garden center and purchased flat rocks that would be needed to help secure the liner around the pond perimeter. The garden center had all kinds of rocks that could be purchased for .29 cent a pound. That sounds cheap until you begin loading up on rocks and do the final weighting! I think we got a total of 1600 pounds of loose rocks and added about 15 bags of pebble rocks bought at different times to our rock total.

After filling the pond, placing the rocks, building the waterfall and connecting the pump, all was ready for the test. It was a lovely sight to see the water course down the carefully placed waterfall rocks and splash into the pond; the sound of water is soothing to the soul. 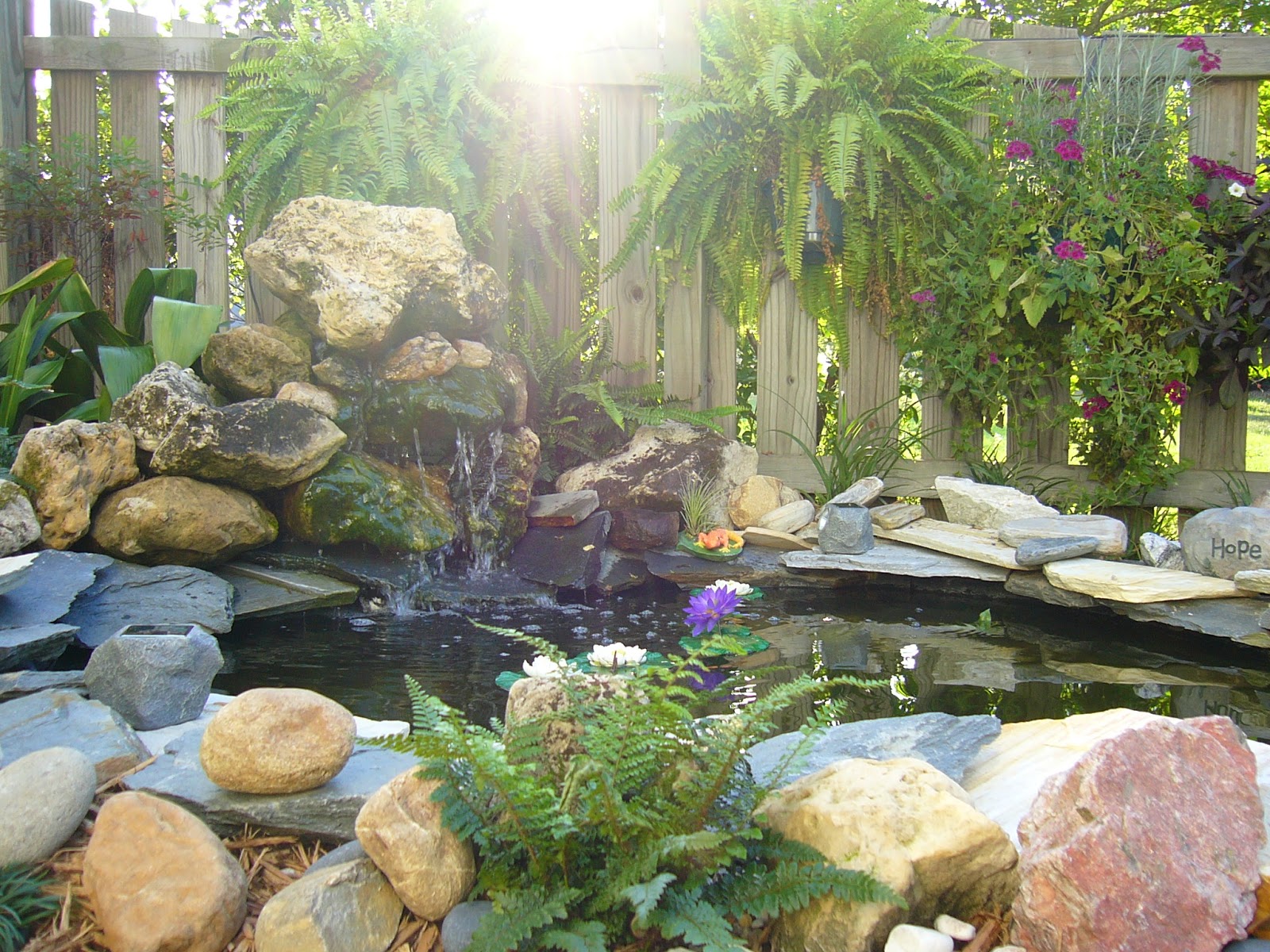 There was much to work on to complete the pond. I had to hang up flowers, plant ferns and other accent plants, install a drip irrigation system, install weed block and mulch. This took about a week and a half to complete. 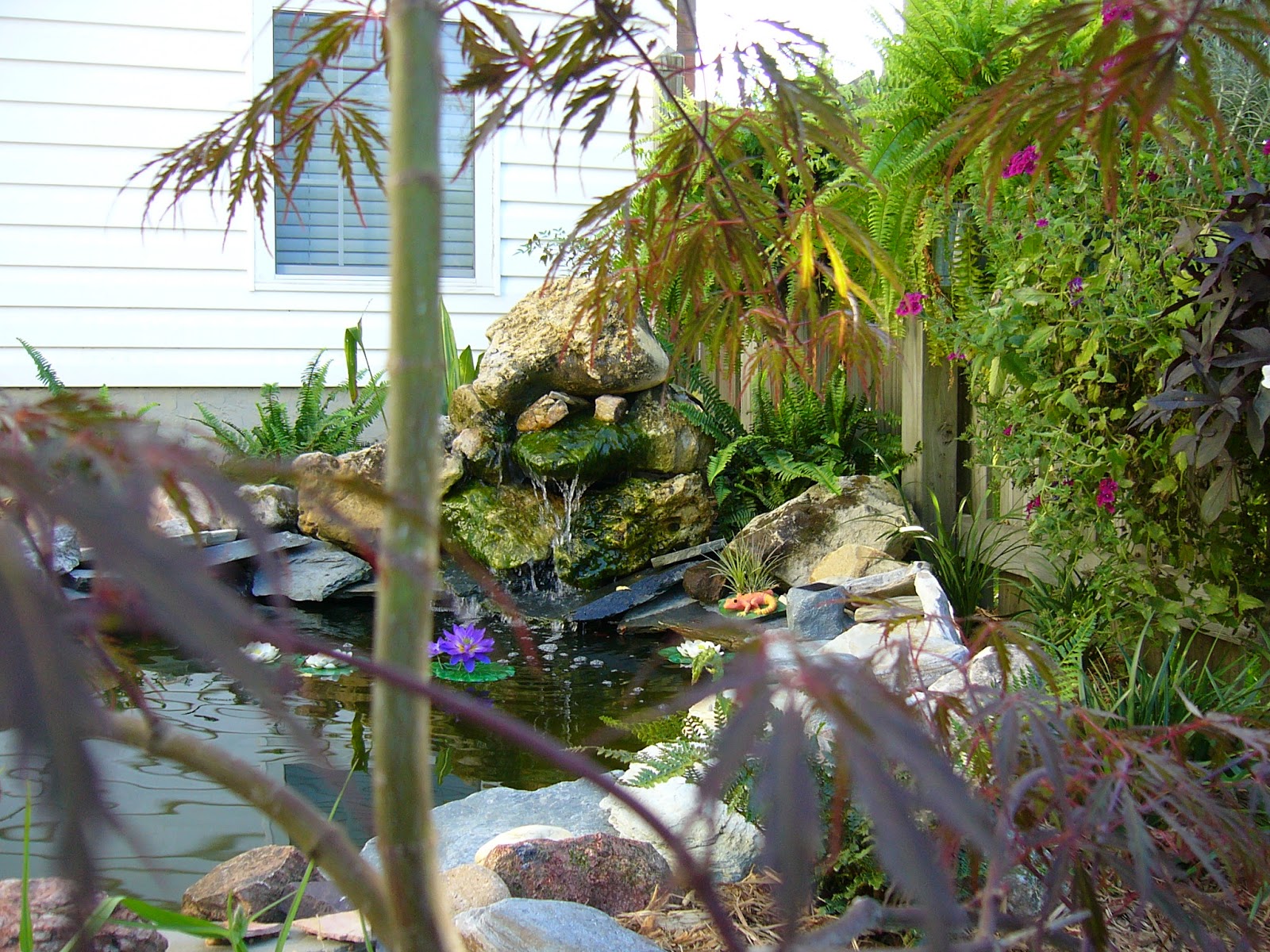 As luck would have it, a few days after I finished, my wife bought a book at her school book fair about outdoor projects which included building garden ponds and streams. Ah! A stream! It looks so grand in the book and I proclaimed “ I must have a STREAM”. 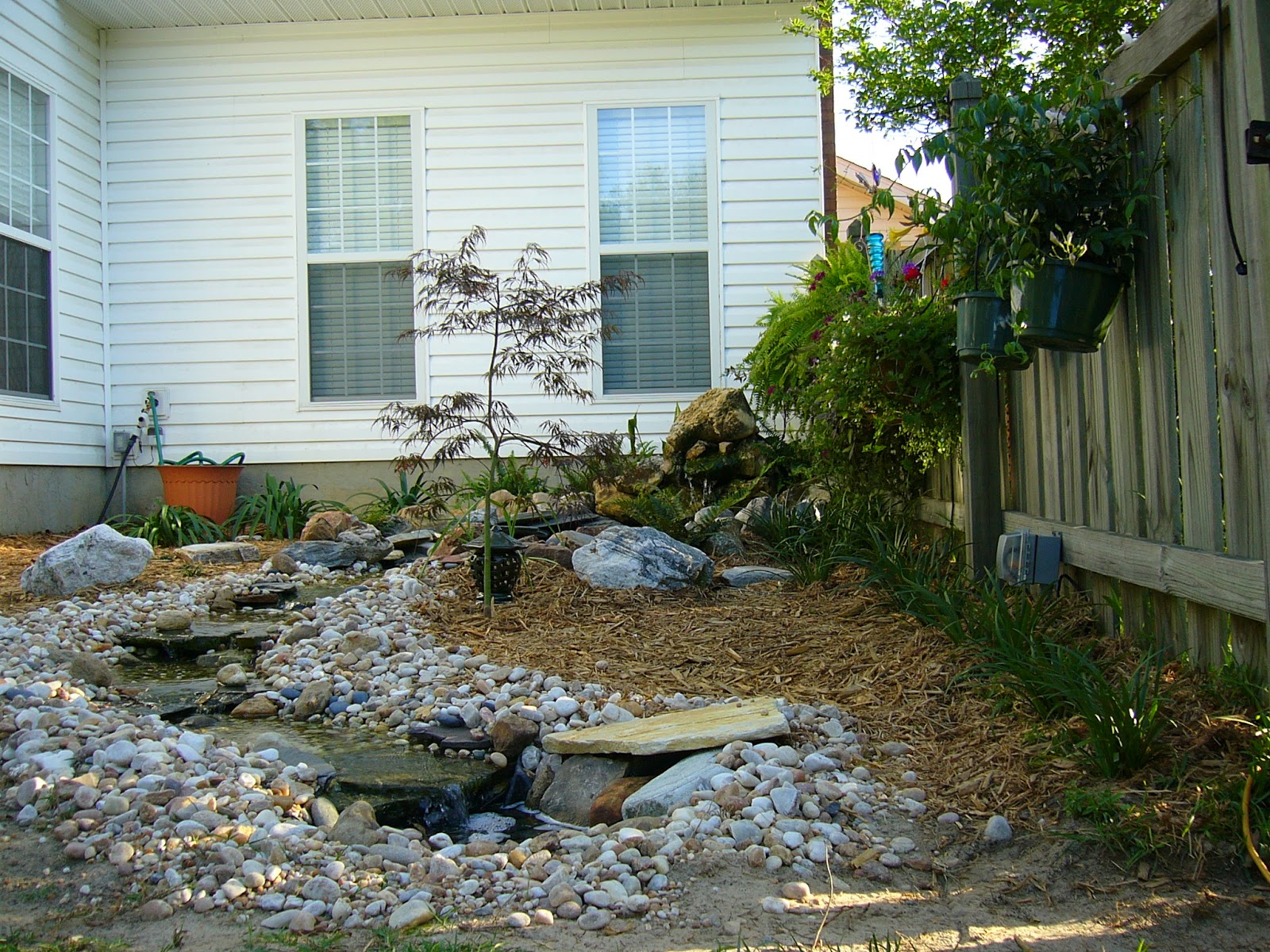 I proceeded to eyeball the fall of the land and plan the layout of the stream. It really looked so easy in the book. How difficult could it be to have water flow downhill to a creek bed? I discovered there is more to a stream than you would expect. There is the question of the end water holding area quantity, the quantity of water in the stream and the amount of water in the upper pond. Plus you must calculate the pump flow and distance it will pump and the rise of the waterfall.

Since I was on a tight budget, I wanted to keep expenses down and use the least amount of liner as possible. I decided to make the lower water area look like a creek rock bed instead of a pond to cut down on liner. I did calculations and decided my lower water container needed to hold a minimum of 20 gallons of water, which was the quantity I estimated would be in my stream. One cubic foot holds 7.5 gallons of water. I planned to dig a 2 foot square hole as my lower holding “tank” and instead of filling the hole with expensive rock, I would put four five gallon buckets, drilled with holes then surround them with rocks and put rocks on the top bucket lids. One of the bucket would hold my pump with the lip trimmed for easy removal. Additionally, I later plan to use that bucket as a filter by inserting filter medium. A perfect 2 foot square hole will hold 60 gallons of water, but of course this hole has rocks taking up part of the capacity, but I figured this hole would take care of all the water needs of the stream and pump flow.

I proceeded with my stream construction and included four mini falls. 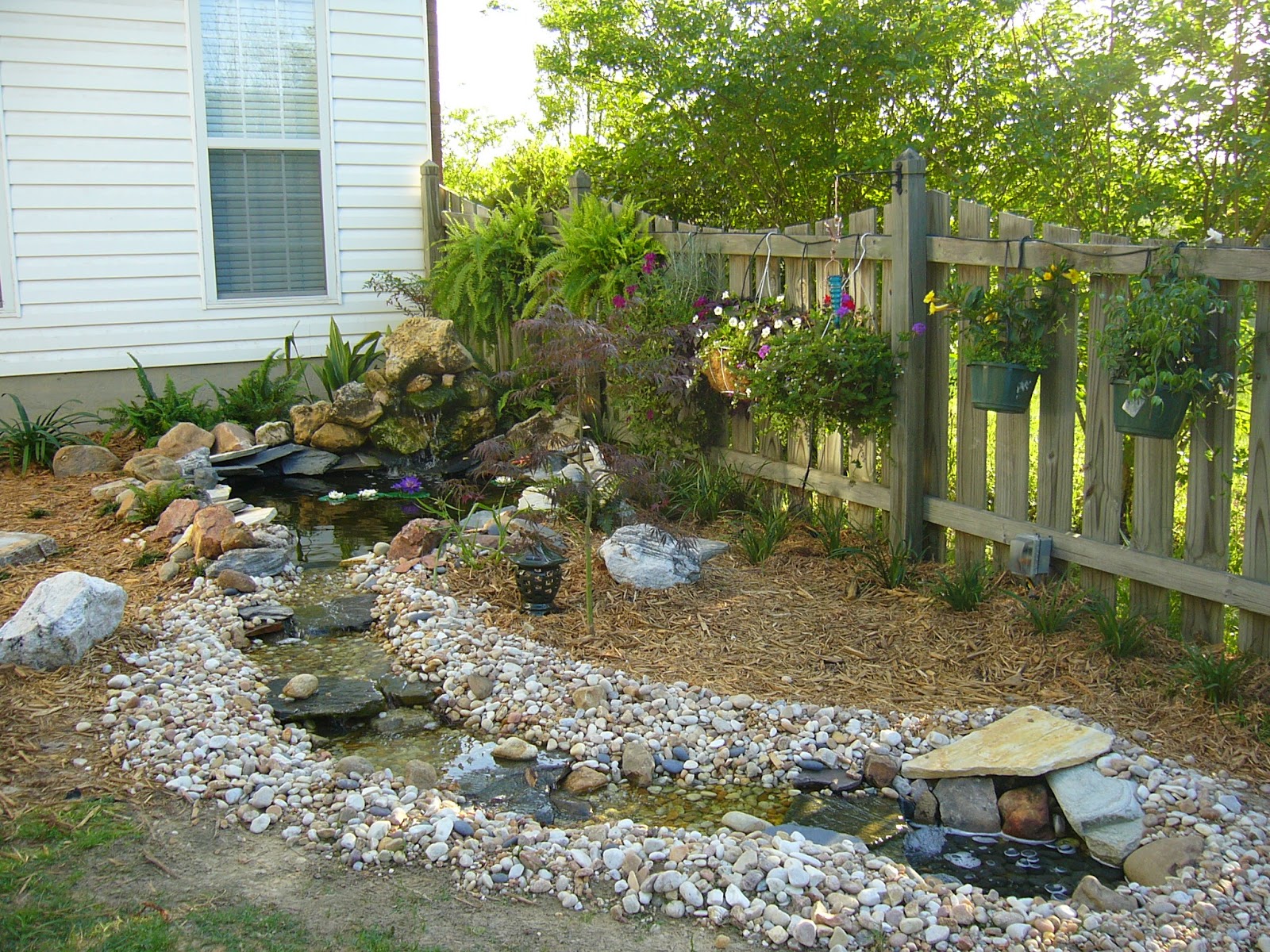 
One problem I encountered was fitting my four buckets in my perfect hole. Keep in mind, I had purchased the minimum amount of liner which constrained me on my lower hole dimensions, making no margin for error. If you every do this, please make sure you have plenty of liner.

I finally was ready to turn the pump on. I filled the lower tank, and plugged in the pump and there it went! Down went the water in the hole and I waited for the stream to start. And waited. And waited. There it came finally, but my lower creek bed was empty... at least at the surface. It sounded like the pump was pumping dry. Actually I don't remember if it did or not, but I could see I had a problem. The pump was pumping too fast, out pumping the lower water before the upper water could return. I solved this problem by installing a ball cock valve in the return line to be able to regulate the flow. Another problem was I failed to calculate the amount of water in the upper pond that would be there and flow down to the lower pond if the pump is cut off. Basically, the lower area overflows, resulting in water loss. I still have not figured out the total dynamics of the water flow and the relationship of the pump, lower bed holding tank, upper water quantity and the outflow, volume and return to the lower bed. The outflow of the upper pond is very sensitive and one change of a small rock at the outflow area can slow down or speed up the filling of the lower creek bed. 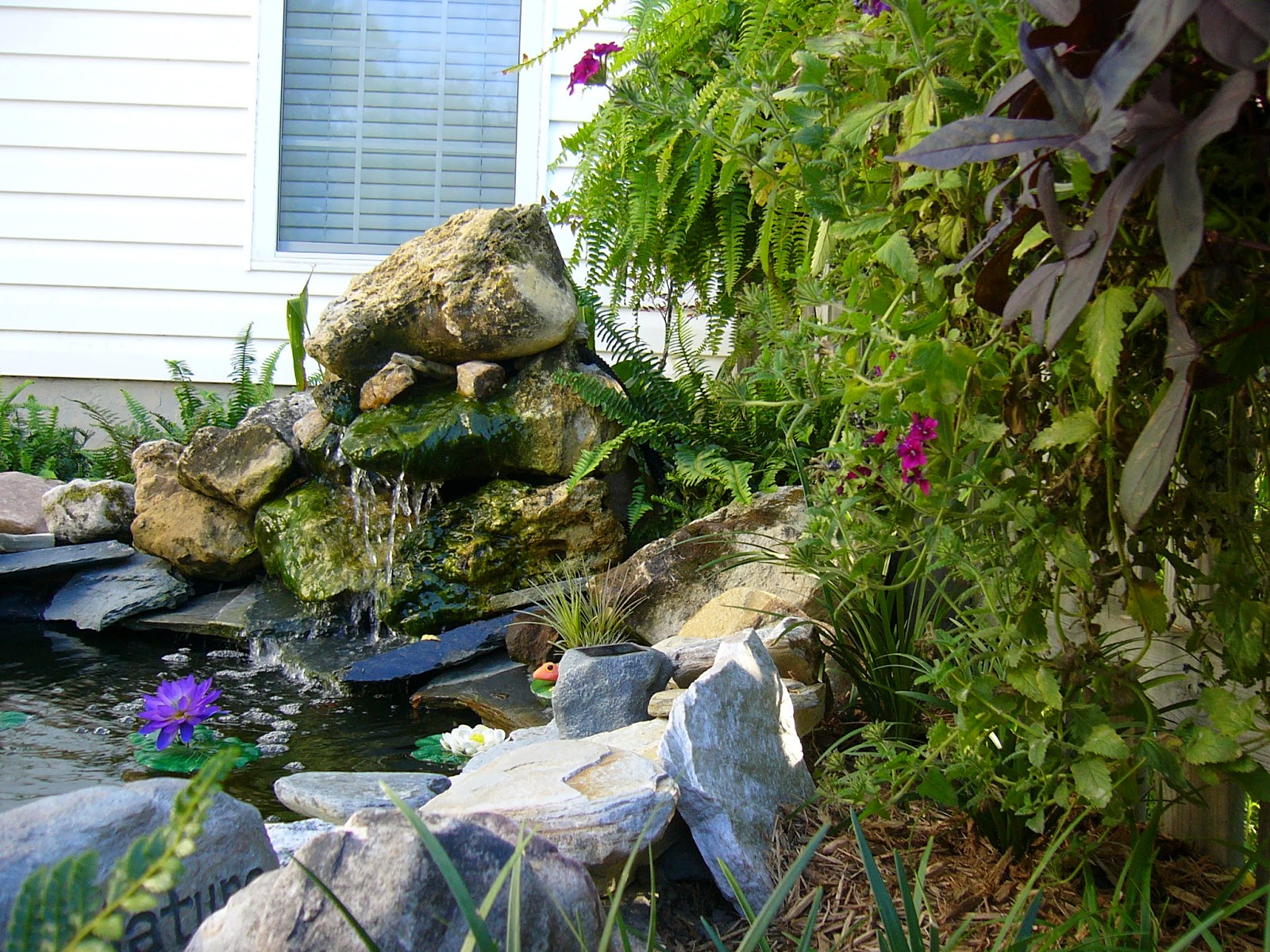 Once the system is started, I add water to the lower bed so it has exposed water and it stays in balance, except for another factor I hadn't considered, evaporation. I could fill the system in the morning and after work the lower creek bed is not showing water, which I want. At first I thought I had a leak, but I remembered watching a video about global dimming and the discussion of evaporation. I did a search on Google and found out that in my area we have an average of 60 inches of evaporation per year. I did the calculations and figured on average I would lose about 3.5 gallons of water per day. The amount of water I wanted showing above the creek bed rocks calculated about that amount of water, therefore as the day progressed, the water evaporated and the dry rocks shown. If you are going to make a lower creek bed with water showing, you will have to make it large enough that after a days evaporations you have the needed water area to accommodate the water loss. To solve this problem, I just added one more dip irrigation outlet to the upper pond so it adds 4 gallons of water per day. 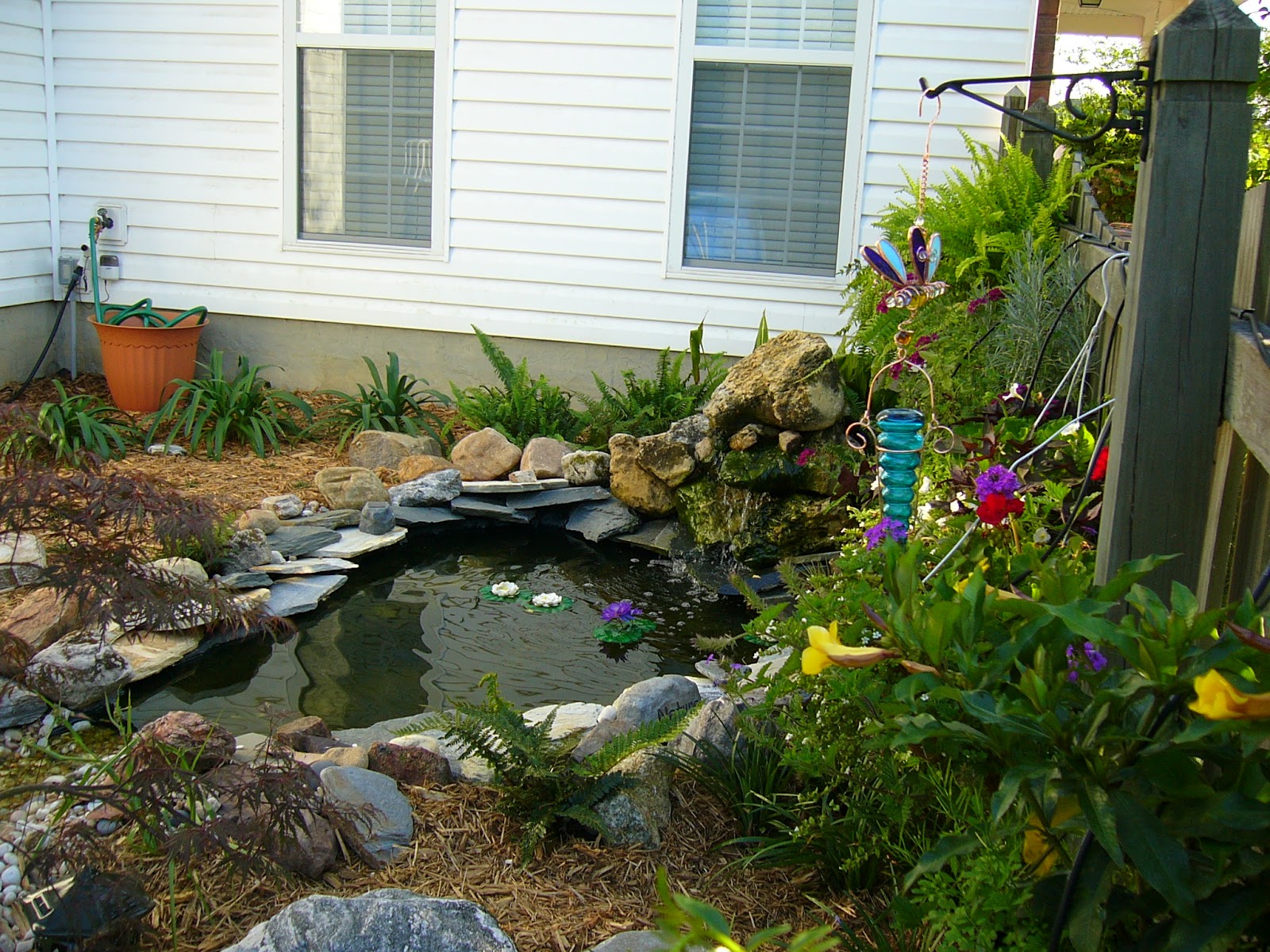 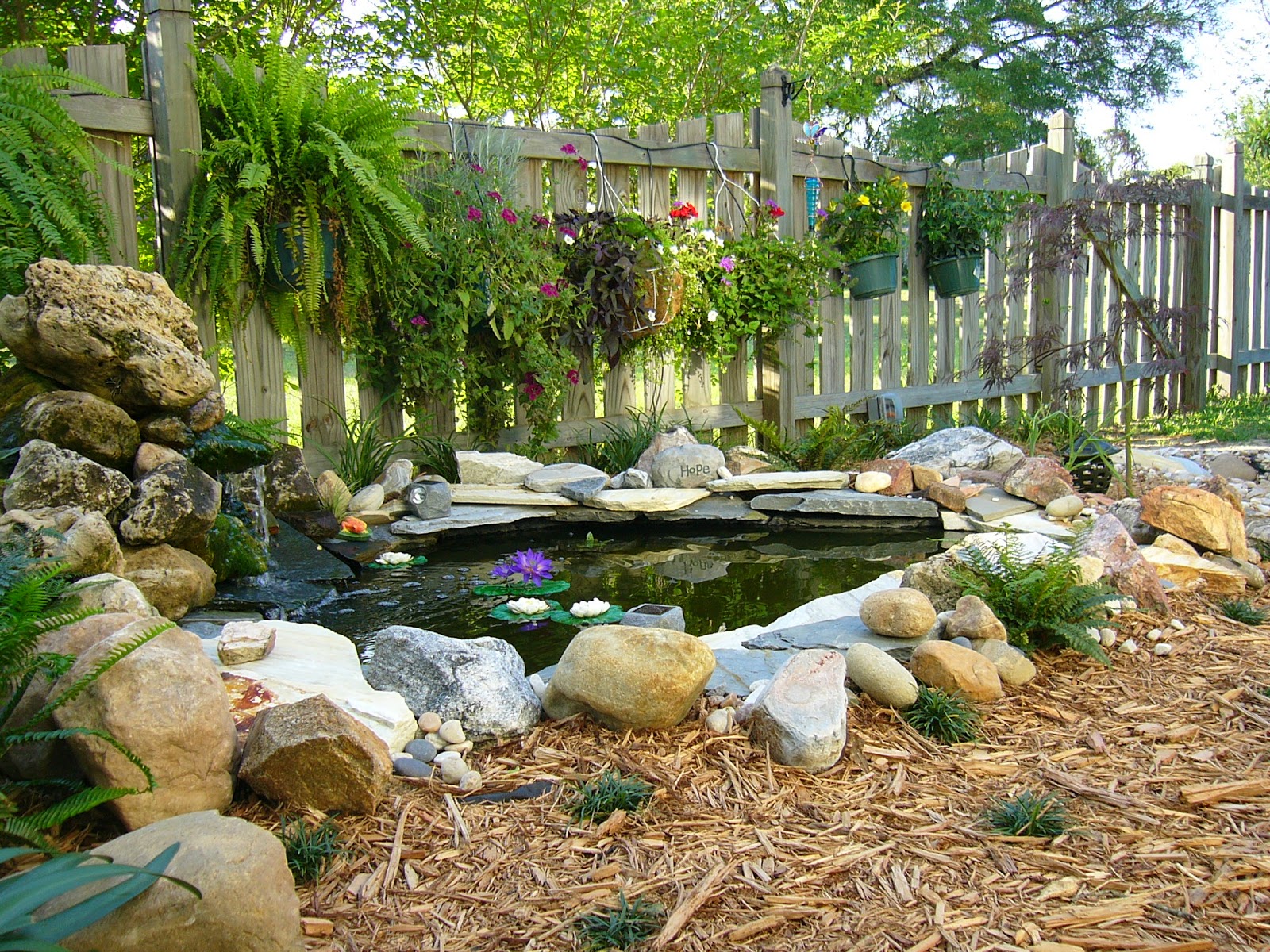 The pond is working well now and all I have to do is continue to add rocks and more plants to increase the “natural” look. It has really been a fun project and I would recommend the addition of a garden pond to any garden.

Here are videos of my pond. The first is after it was finished and the second video is six years later.

Popular posts from this blog

March 08, 2003
Torreya State Park is located about 60 miles west of Tallahassee, Florida in the “Big Bend”. This park is noted for its varied terrain, ranging from hardwood to swamp wetlands and an area we Floridians could call “canyons” (large washed out clay hills). It’s the closest thing we can find around here that is similar to the beautiful Appalachian Mountains. The park has a nice network of trails to explore. My 13 year old son and I arrived at the park on Friday afternoon at 3:00 pm, the first day of spring. We had made reservations ahead to ensure our sites in the primitive camp areas. Because our region had been receiving abundant amounts of rainfall, we knew the mosquitoes would be in full force. We were not disappointed. We came prepared with plenty of bug repellent.  This trip could be called an "Introduction to Backpacking" for me and my son. We have done car camping, but yearned for a taste of “true” camping. Having enjoyed accumulating our assortment
6 comments
Read more

June 29, 2013
Removing Anti-Reflective Coating Anti- reflective coatings sometimes will start to flake off your plastic lenses if you have the older type of coating. As I type this, I'm looking through lens that are now clear as new. My progressive glasses are 3 years old and are polycarbonate, scratch resistant, UV protected with a $65  anti-reflective coating. About an hour ago I could hardly use them and pricing new lenses were $400. When I asked the Optician about the quick deterioration of the coating ( they now offer a new and improved coating costing $135) he asked if I sweat a lot, as that can cause problems. Lately this has been true, because I have been doing spring yard work and digging a garden pond causing the lenses to deteriorate fast. This is how I removed the coating from my lens.  I took standard iodized table salt (figuring if salty sweat was effective, a salt solution might be also), poured it into a bowl of water, heated in microwave to a temp I could touch,
7 comments
Read more

November 03, 2013
Review of Crocs Men's Modi Flip Flops As a result of an injury and suffering from Plantar Fasciitis and a heel spur, I needed some comfortable flip flops that offered support and heel comfort.  I previously had some Croc knock-off, slip on shoes and they felt comfortable, so I did some online research, reading reviews about various Croc shoes, and determined that the Croc Modi Flip was highly regarded. I went to my local sports store and tried on half a dozen flip flops to see which were the most comfortable, comparing them to the Modi Flip, and determined I like the Modi the best as they seemed to provide the best comfort for my heel. As an added bonus they have nice foot massage bumps. I first bought size 11 thinking it fit the best, but once at home, sitting and walking in the house, I decided they were a little snug across the top of my foot, so I exchanged them for size 12. They fit perfect, not too tight when sitting in a chair, yet snug enough when walking.
8 comments
Read more